You're never too old to change

Bikram has a very famous saying, “Never too old, never too bad, never too late, never too sick to start from scratch once again.” All Bikram teachers, and most regular practitioners know this saying and hopefully try to abide by the idea. New beginnings are always possible.

In December my grandmother died. She was 96. Until about a year before she died, she was pretty lucid. Grandma, or GiGi, as my daughter and her cousins called her, was not a flexible woman. Raised in North Dakota by Danish immigrant parents, she was a by-the-book conservative. Grandma majored in home economics in college and was tough on diet and physique. Grandma was wholly concerned with appearance both physically and socially. Once in my teens when the fashion among my clique was to wear men's pajamas to school, she hid me behind a large potted fern to take my photo so that just my head peeked out. At Grandma's house in Fargo, we did all kinds of crazy stuff that never happened in our bohemian-oriented, liberal house in Chicago. We made our beds, said grace before dinner, vacuumed the Oldsmobile, ate beef.

My grandfather was also conservative, a small-town doctor and 100% republican. But Grandpa somehow tempered Grandma's strictness. When my grandfather was alive, he would tease Grandma about her rigidness, "C'mon Sally, let'm have a big scoop of ice cream." My grandfather died when Grandma was in her late fifties and I think that might have made her tighten her rules-belt even more. When she visited us in Chicago, she organized my drawers and my closet, bought me Lanz of Salzberg nightgowns to replace the oversized t-shirts and underwear I slept in, and spent lots of time in the kitchen, scrutinizing the bizarre goings on..... the wok, the rugged butcher block table my family gathered around, the half-open bottles of wine. As a teenager, I always stressed out a bit before visits with Grandma. Would she like my outfit? My haircut? Once I became a parent, I stopped worrying so much. Grandma became GiGi. She loved being a great-grandmother. The focus was now off of me and placed lovingly onto my then tiny daughter who could really do nothing to offend GiGi at her young age.

When GiGi was in her eighties she got remarried to John. John had been a close friend of the family for years and after his wife Florence died, he and Grandma hooked up. John, unlike my republican physician grandfather, was a former academic, and a democrat. Grandma was totally smitten with John. She would coo, "Isn't he clever?" And he was. John published word puzzles that he'd distribute all over their retirement community, doing his part to stimulate his sharp mind and keep all the other old brains fresh. John mellowed Grandma out a lot. She was so in love, so tickled to be in a stimulating partnership, to find romance (again) this late in life, that she stopped really caring about what anyone else was doing. It was a joy to visit the newlyweds at their little apartment in Sun City, Arizona. They were truly happy.

In 2008, when Barak Obama was running for president, Grandma shocked us all by voting for him. My grandmother's first democratic vote, our first African American President, at the age of 92! Growing up, I remember hearing the adage, "s/he's too old to change" about people far younger, and far less rigid than Grandma. Sometimes when I'm teaching I tell this story about Grandma voting democratic. I watch people following their same old habits (we all have them). "If my republican Grandma can vote for Barak Obama at the age of 92, you can resist wiping your brow in Standing Separate Leg Head to Knee!" Never too old. Never too bad. Never too late. Never too sick. Cheers to Grandma! 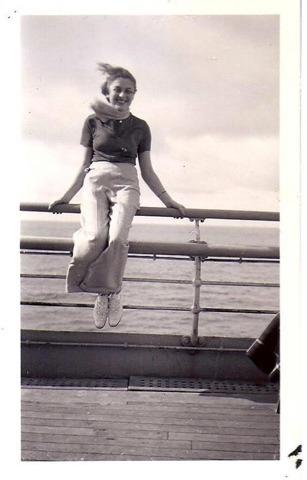 On Thursdays, I teach yoga to at Lucia's elementary school. It is a surreal experience in many ways. The school is 'open-concept' which means that there are no walls. In many ways it is great. It feels like a true community. Everyone sees everyone all the time so, even if you are not personally acquainted, it is as if everyone knows each other. The downside is that people literally walk through the yoga space throughout the class. The school secretary announces messages on the speakers during Savasana. The janitor pushes the rolling recycling bin through our Namaste circle. It's always something. But these kids are pretty used to these distractions and manage to focus in spite of the surrounding chaos.

The little Yogis and Yoginis in the kids' yoga class are amazingly able to be still in Savasana. They know that when they are in Savasana, quiet, eyes closed on their mats, perfectly still, a surprise Beanie Baby will land on their belly. When the get out of Savasana, they get to meet the animal and keep it on their mat for the remainder of class. It's amazing how still they can be.

Lucia, now eight, a know-it-all, and fairly experienced yoga practitioner for having assisted me in every kids' class I've taught, insisted this session that I teach Ustrasana (Camel Pose) to the kids. "Sure," I said, knowing that with the natural spinal flexibility kids have, "it would be pretty easy for them." Two weeks ago, I introduced the kids to Camel. "Ooh!" "Owwww!" "Ahh-Ahh!" "Whoooaaa" they peeped from all around the room. Some little ones flailed their arms to regain their straight spines. I watched little bodies collapsing, tiny wrinkle-free faces turing pink. "Jezum," I thought to myself, "these kids are dramatic."

The next day I was teaching at The SweatBox. When Camel Pose came round I watched the grown up responses-- furrowed brows, clenched teeth, bright red faces. They were doing the posture and they were managing to do it in silence. I know that most people were really struggling, but they kept it inside. I had a flash of the little kids owwing and oohing and ahhing the day before in class.

I love teaching yoga. I love the connection that comes through the struggle. I love feeling inspired by the hard work and dedication. I love the authentic energy that emerges through dedicated practice. I get something different from teaching children and adults. With adults, I feel empathy, compassion, and so much love for the students. I've been there. I know how hard it is. I admire them so much. With children, I feel pure joy, renewal, excitement, and love. I see how utterly authentic they are in their experience with their bodies. They've yet to learn about assigning judgement to themselves in the way adults are so well-versed. They are truly open. Savasana. Ustrasana. Both really challenging postures, with very different physical reactions. Kids go into Savasana with relative ease, most adults struggle. Ustrasana. Kids don't hold back their immediate, intense responses to the intensity of the pose. Adults grit their teeth and bear it.

As always, yoga offers great metaphors for life. When we are young, we are open and free and light. As we get older, we pile on layers of life that inevitably make us less so. These layers of life can act as distractions when we are trying to still our minds in Savasana. And they serve us well to find our determination to be still and quiet in Ustrasana. As for the kids, they are exactly where they should be-- unburdened by adult troubles in Savasana and letting it all hang out in Ustrasana. My hope is that, as kids continue their yoga practice, just like us grownups, they will learn how to use their life experience to help them in their yoga and how to use their yoga practice to help them in their lives. 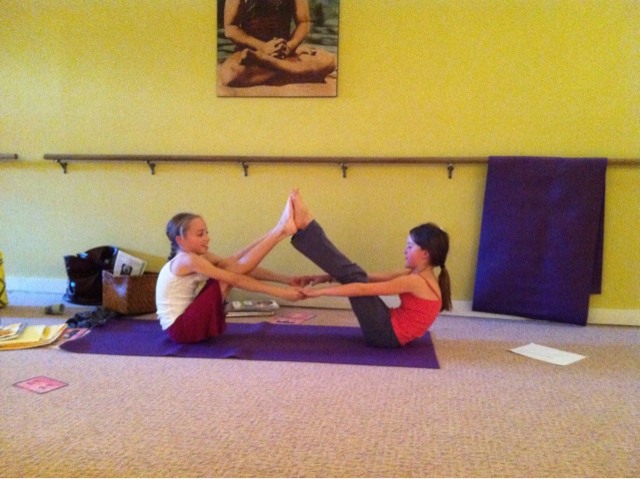