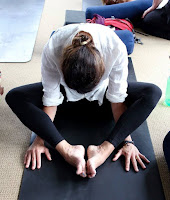 Right now I am participating in the Fall 30-Day Challenge at The SweatBox. I (try to) do yoga every day for 30 days. Some days I do Bikram, other days Vinyasa, and other days Yin. Some days I do both. I'm noticing is that my mental approach to my practice is changing. I enjoy each class I take and feel grateful to be able to practice yoga of any kind whenever I step into the studio, but I'm aware that how I go into my practice has changed.

My first committed practice, the one I clung to and did religiously for 20 years, before stepping into other styles is Bikram Yoga. Bikram Yoga appealed to me I think because of my competitive nature. I swam competitively for almost fifteen years and I grew up in a fiercely competitive house with my two sisters, one twin and one 21-months younger. It seemed we were always striving to be seen and heard by our parents in some way. The repetition of Bikram practice comforted me. I could get better at all of these postures, notice my progress, watch my evolution really clearly. The sameness of the series also mentally and emotionally comforted me. I didn't have to worry about being "good" or "proficient" at these postures; I only had to focus on working hard to get better at them.

Then I started practicing more Vinyasa Yoga and the challenge of it also fed my competitive inclinations. I had the strength to do this practice, and I could see how I'd get better if I worked harder. I strived for that, worked hard, and it has been incredibly fulfilling and satisfying.

And then I started doing Yin Yoga. At first it was confusing. Where is the battle? What I am I working towards? Pushing against? That piece was missing, yet I still felt fed by the practice. The challenge was there but the striving was not. It became clear to me when I went to Canada to train more extensively in the foundations and philosophy of Yin Yoga; the difference was the intentional absence of pushing, forcing, grinding. This absence, I learned, was a foundational premise of Yin Yoga. Once I started teaching Yin and watching my students-- the calm expressions on their faces, their eyelids gently closed, the softness of their fingers and toes as they held different postures-- I could see clearly this difference. There is a whole process going on internally, one that is slowly, quietly feeding each of their bodies and minds in ways that each of them needs.

The striving was gone. In its place was allowing, yielding to the body's position and letting the posture happen. It's beautiful. Sometimes when I'm teaching Yin I feel an emotional welling up. It's nothing in particular, just the idea that the competition is gone. There is no struggle to be seen and heard because all of that is happening inside.

Since I've integrated Yin Yoga into my practice,  I notice the difference in my Bikram and Vinyasa Yoga. I work just as hard, but I am a little more open to "allowing" and listening to my body guide me when I am in triangle or half-moon. An outsider wouldn't notice anything different about my practice. It looks just the same but it feels different. I am calmer, there's less fight, less grind. The striving is gone, and I'm working just as hard.
at October 29, 2016 No comments: Links to this post 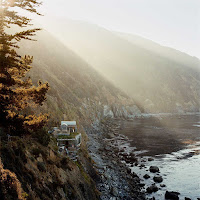 Last week I got a phone call on Wednesday letting me know that I'd made it off of the waitlist for a weekend writing retreat that started the following Friday. I had tried to register for the retreat in May but sadly it was full. Because I had no notice to plan for my trip, I didn't have time to get worried or nervous or anxious. After scrambling to cash in miles and get a last minute rental car, I packed my bag and flew to San Jose and drove three hours to the beautiful Santa Lucia mountains.

The retreat was held at the Esalen Institute, a stunning retreat center nestled in the mountains of Big Sur, Northern California. Esalen is home of the human potential movement and some of the most splendid hot springs (Esalen people call them "healing waters") I've ever experienced.

During the retreat, I had the opportunity to take a writing workshop with Heather Sellers, the author of a memoir titled, You Don't Look Like Anyone I Know. Heather has a neurological disorder called prosopagnosia, also more commonly known as facial blindness.

In addition to being a really talented writer, Heather has a magnetic personality. Her teaching style-- a combination of modern dance and spoken word-- is profoundly entertaining and educational. I learned more in two hours with Heather Sellers than I learned in a whole year of a University of Washington writing program.

One of the things Heather talked about was being open in our writing-- she invited us to throw away the planning of it.  She shared what she's learned from living with facial blindness; she lives every minute of every day living in the unknown. While she'll meet you and see your face, she has no ability to remember it one minute later or ten years in the future. As I sat, riveted by this amazing woman, I thought how much strength and creativity she has cultivated through this experience of living in the unknown.

In between workshops, I had small breaks to enjoy the healing waters of Esalen. On their website, they state that nudity in the baths is "not mandatory" but those words alone let me know that nudity is standard, even expected. I am a painfully modest person so I was naturally nervous about group nudity. I thought, as I walked down to the baths the very first time how it would be great if everyone, including me, had facial blindness.

Personal writing can feel a lot like nudity. It's vulnerable and exposing, potentially embarrassing. During the different workshops, I found myself only wanting to share my writing that was less revealing. Some things I wrote felt too personal to share with people I had just met hours before. But, as I listened to people read their work that was very intimate and exposing, I didn't have any judgment or criticism about their work. I felt grateful and humbled to be able to share what they created.

I did make myself step into the unknown of group nudity. I went to the baths several times, nude. And each time I was okay. Just like in the writing workshops, I felt no judgment, no criticism towards any of the nude bodies at the baths. And of course, none of the other people cared that I was nude. Everyone was equally revealed, equally exposed, and it was beautiful and it was healing.
at October 27, 2016 No comments: Links to this post 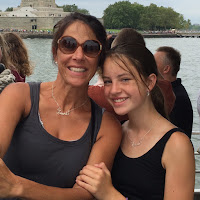 Last week on the way to school, Lucia said, out of the blue, “Mommy, I'm just not spiritual.” I’m prone to parental lecturing, oversharing my opinion, but I’m newly enlightened by a book called Untangled by Lisa Damour. The book breaks out the major stages of female adolescence.  Instead of launching into one of my moralistic lectures, I remembered the author’s wise words about how 11-year-old girls are just dipping their painted toes into independence. They are making overt efforts to establish themselves as wholly separate from their parents.

I stayed quiet. I just nodded and vocalized an “Mmm hmm” of acknowledgement to her declaration. “I mean, it’s just not my thing,” Lucia continued, “spirituality, I mean. It’s just not for me.”

Okay. I thought to myself. She is different from me. She is letting me know how different. And, I, in a clear moment of parenting lucidity, recognized that we were both doing our jobs--- she was establishing her individuality, differentiating from me, and I was letting her do it! Two points for the mother-daughter team!!!!

As I was teaching Yin last week, the experience of my conversation with Lucia came into my mind. Yin Yoga is an intensely calm and quiet practice, and as such, there is room for lots of mind-wandering. In Yin practice, there isn’t the endorphin rush or constant movement present in more Yang styles like Bikram or Vinyasa. This absence can create an environment where mental wanderings proliferate. It’s easy for thoughts to enter our minds that we perceive to be “bad” or “wrong” or “inappropriate.”

I told my students the story about Lucia’s declaration of “not being spiritual” and shared my response—to let the pronouncement sit there, to make space for it. Once that happened, we could both move on, and feel good about the experience. Had I glommed onto a resistant response, “Honey, you never know. Someday you might  become spiritual….. Do you really know what spirituality is? ……blaaaah, blaaaah, blaaaah.”

As I looked out into the sea of bodies, everyone had their eyes closed. They looked so peaceful and serene. But as a student, I know that closed eyes doesn’t mean quiet mind.  I encouraged the room of students to make space for the myriad parts of themselves, the different voices, unexpected feelings. Resistance to a posture might come. Let it come. Make space for it. Frustration might interrupt your serenity. It’s part of you. Let it be. Only by making space for the things we don’t necessarily want, can we get to the other side to discover what else is waiting to be seen and heard.

Adolescence is a time of rawness, extreme evolution, individuation, and identity exploration, but that process doesn’t stop when we become adults. When Lucia said to me, “Mom, I’m just not spiritual,” I was able to recognize that she is in a moment in time in her life, a moment that is not permanent; her perspective could last ten years or ten minutes. But it’s hers. It’s part of her right now.

Whether with your own body in your yoga practice or the car with your kid, make space for the new, the different, and the unexpected. Who knows what you’ll find on the other side.