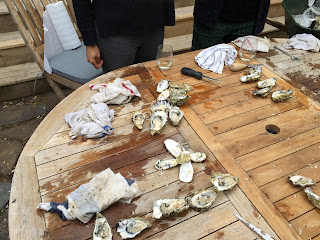 A few weeks ago, Nancy and I went to Lilliwaup, Washington, home of Hama Hama Oysters. Every year they have the Hama Hama Oysterama, a festival that involves harvesting one's own oysters. Between the two of us and the handful of friends we went to the festival with, we collected 32 dozen oysters. We made a plan about what we'd do with them all:


The cooking was a big part of it, but before we could cook them, we had to shuck all 384. Nancy, a native of New Orleans, grew up shucking and worked in an oyster bar in college, so she gave us a basic tutorial. Between the ten of us at the oyster dinner, we had a hearty group of people shucking oysters pretty much all day long. If you've never shucked oysters, you know there's a skill to it. In addition to having a good shucker, you have to know how to hold the oyster, where to insert the blade, and how to cleanly separate the oyster from the shell. We threw out some bloody oysters and used a lot of bandaids in the process of reaching shucking proficiency. 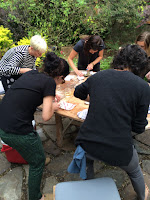 By about 3pm, after many courses of oysters, someone decided that we should have a shuckathon. Judges were named, criteria were established, and contestants were registered. There were six of us competing. We had five minutes to shuck, separate, flip and present our oysters. Despite my fierce competitive attitude and a few new cuts on my hands, I didn't win. Though I was the second to complete my shucking, and I lined up my oysters artistically,  I neglected to flip any of my oysters to hide the ugly bottom muscle. The winner, receiving the title of "Mother Shucker" until next year, was not the first to finish, but the best on all categories.

Even though there was only one true Mother Shucker that day,  I was impressed by was how confident we had all become at shucking oysters in the short few hours we'd been practicing. This struck me because it made me think about how infrequent this feeling has become for me. How often do I actually take on a new skill to learn, build, compete in!!? It's rare. And, it's a good feeling.

Life is busy. It's hard to have time to take on an extra hobby and hone a new skill, but there are micro-ways to get this feeling all the time.  Part of finding ways to experience this feeling is being open-minded and alert to the moments that will get us there. It's kind of like being in a yoga class where the teacher introduces something totally new and different. As adults, often our first response is resistance, maybe a little bit of fear, but once we're done with the new thing, and after we've done it a few times in subsequent classes, we start feeling more confident, even proficient, maybe even like a winner.
at May 18, 2016 No comments: Links to this post 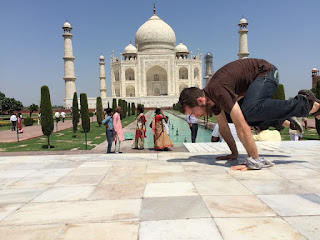 Buried deep inside a ballroom, converted into one giant hot torture chamber, the class of fall 2014 struggled on through posture after posture as Bikram himself issued his command from atop one giant podium.  There’s no way you could see yourself in the mirror with the 333 trainees sweltering mat to mat, front and back, side to side the room was literally just big enough.  With the heat and humidity in Thailand, there was hardly a moment during the entire nine weeks that we weren’t constantly sweating, in and out of the hot room.  It was the second class of the day and the evening class, by this time we had already practiced that morning and suffered through 4 hours of lecture, most people suffering from sleep deprivation.  It was hard, really really hard; people collapsing, people leaving the room – they were pushing us to the brink.  Then you start to wonder why you can’t maintain a posture as well as you did yesterday, and you become your own worst judge.  Whenever I found myself in this situation however, which was approximately 97 times over two and a half months, I had to remind myself of one very important thing.  And that was how in the hell I even got to this place, with all these people from every corner of the globe, under the cruel tutelage of a master yogi.  So as the class went on and we push our bodies to the limit, my mind would begin to wonder.

A year – exactly one year – before my present situation, I was in another situation, only then I was learning how to walk again.  I had undergone a 3rd brain surgery in September to remove a cyst which had been growing for quite a while, creating tremendous pressure inside my head and displacing the spinal cord.  It was my 3rd go around with this sort of operation – the first being in 1998 while still in elementary school, the second in 2003 as a sophomore in high school.  By this time I had developed a pleasant disposition toward this seemingly mortal experience and I kept in good spirits knowing that “if I can do it once, you can do it again”.  But whenever I looked at those scans of my brain and the size of the cyst, my stomach would turn in knots and a hopeless feeling would begin to set in.  So it was that on September 11th 2013 I went back under the knife and I knew as the anesthetic began to take over this was that last I would know this body.

I woke up in ICU and realized instantly where, when and who I was; while I knew it was going to be a long road to recovery, and that I might never be the same again, I was so happy because I knew that I would recover.  Then another thought came into mind, an idea that I had been toying with even as I prepped for surgery less than 7 hours ago.  It was pretty clear that things were going to be different from here on out and I was most likely going to have to leave my old occupation as a metal worker.  It was an intense job putting my body through a lot of stress which certainly contributed to my present hospitalization.  The idea was clear in my head that I was going to have to become a Bikram teacher, not only as the method to rehabilitate my body, at this point it was more a matter of shear survival.  I had already been practicing for seven years and given a lot of thoughts to becoming a teacher one day.  I’m a firm believer that the universe has a way of keeping us on a certain path; over the years my practice would ebb and flow, whenever my practice was at its strongest, life would just seem to so much easier.  Nerve damage as a result of my previous surgery had plagued me for years, but it would improve tremendously the more I practiced.  It would take me 3 months and a lot of therapy to get back to work, but the stage was already being set in my mind with a path clearer than the bluest sky’s.

It took one month before I practiced my first class after the operation.  I wasn’t near being able to perform all of the asanas, but I knew that even if I did only the breathing exercises and lay in the heat for the 90 minutes, it would do a world of good.  It did, but it was also the hardest class I had ever taken because my body had been through so many traumas.  I laid there sulking for most of the class while the instructor – a good friend – took the greatest care to accommodate my new condition.  It took time for the nerves to repair so to establish a consistent practice, even though the postures were more challenging than they had ever been, it was working.  Through the pranayama and the postures I could tell each time I went that I was getting stronger physically, however, it also kept me mentally focused and out of depression.  Often times after anyone goes through a life changing operation people have a hard time adjusting to their new circumstances, which is normal, yoga made that adjustment possible as well as bearable.  Three months out from being bed ridden at Swedish and I was practicing 5 times per week and going to the gym in preparation to return to work, discontinuing therapy as well as medications.


I returned to work but I was never sure if I was ever going to be able to attend a teacher training; it really started as a “what if” idea that I fantasized about.  Time went on, and the “what if” slowly but surely turned into “it could”, eventually “it could” turned into “I can”.  Month after month the reality grew and grew until “I can” turned into “I am”, which brings me back to that relentless hot room in Thailand on the far side of the world.  Whether I fell out of postures in that room, or simply couldn’t stand at all didn’t even matter.  I never worried about completing training, or, denied a certificate; none of those even mattered to what I had to go through just to get there.  Certainly, having come this far, the rest would be a walk in the park.  Bikram yoga didn’t just save my life, it became my life and it continues to make me thrive in mind, body and spirit.  Life is a blessing, and from where it came from we may never know, but we do know that how we choose to live that life, whether in joy or misery, is completely within our power.

About Seth: You can find Seth Teaching at The SweatBox. Seth's yoga journey began in 2007 at the suggestion of a friend and teacher, who later became a mentor. At the time Seth was working in the trades as a welder and metal fabricator.He finally tried Bikram and after a few weeks of regular practice he noticed the difference the practice made in not only his balance and coordination, but also in his focus and discipline in all areas of his life. In September 2013 Seth underwent a third brain surgery to remove a cyst near the base of his spinal cord; the cyst a result of a tumor fused with the brain stem. The first thought that came into his mind after waking up from that operation was of course “yoga”! But more than as a student, Seth wanted to become a teacher, and almost a year to the date he began his Bikram training. Since then Seth has been able to travel the world teaching in several other countries and major cities in the United States.
at May 05, 2016 No comments: Links to this post