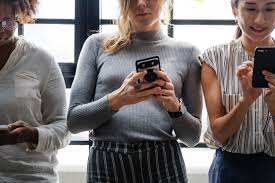 Since we opened The SweatBox eighteen years ago, we've never had a wall clock in the studio. This is deliberate. We want people to try to practice and be in the moment. I remember in high school the wall clock was like a plague, keeping us tortured students abreast of every painstaking second we endured in geometry or chemistry or world history. We wanted to create a different experience for people in the yoga room, an experience where time, for just a few hours, was suspended.

Some people do wear watches to practice, but the majority of people take them off to practice because they are uncomfortable. I've noticed an interesting new phenomenon at the studio lately of people wearing their Apple watches into practice. I sometimes see these people looking at their watches. Not having one myself, I don't know if they are checking their text messages or checking the time.

A few days ago someone actually had their phone next to their mat. Occasionally we'll have a medical professional who is on-call for work and they have a pager or phone, but we have an otherwise strict no-phone in the studio policy. But what of these new Apple watches? Do they invite the same kind of checking that we do on our smart phones?

When we practice yoga, we are doing a form of moving meditation. In this action, we are creating new neuro-pathways, opening doorways to new patterns of thinking. We are experiencing life in real time, in the present moment. This is an important (I might even say critical) part of creating life balance. There is too much screen time for all of us. This is no secret. It has become a public health issue.

Sometimes after taking class when I'm in the shower room getting dressed I'll notice people sitting, still in their sweaty yoga clothes, with their phones, scrolling to see what they missed during their yoga class.  I would probably do it as well except my phone is never in the dressing room with me. As I watched a woman last week, eyes glazed on her screen post-class, I thought of a challenge for myself and for anyone who wants to try it.

What if, for a half-hour after every yoga class we practice, we DON'T look at our phones? What would that be like? Would we notice that calm, energetic quality we have after final Savasana settling in a little bit deeper? Would a half-hour turn into an hour or two hours of just being in the present moment?

It's a big challenge. It will take a mighty effort for me to do this. I'll probably linger longer in final Savasana. I might hang out in the dressing room and lobby talking to people for more time than normal, but I want to try it. I want to see how it makes me feel.  One half-hour, thirty-minutes, after yoga class- no screen time. Can I do it? Can you? I invite you to take the challenge.