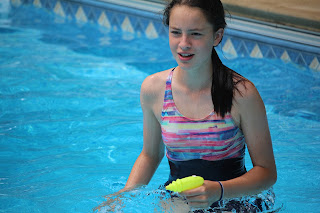 I'm rereading the book Untangled by Lisa Damour. It's book designed to coach parents through some of the natural behaviors in their teenage girls. The author does a great job clarifying some of the ways teen girls treat their parents and demystifying the reasons behind these behaviors.

I lent the book to a friend and then, after a few days of really hard mother-daughter time, I hastily borrowed it back. As I was rereading it over the weekend I came across Damour's swimming pool analogy.

Teenagers are breaking out of childhood, basically taking a big plunge towards adulthood. It's like they are in a swimming pool, playing, splashing around, goofing off with their friends, treading water, trying to stay afloat. But every so often they have to come to the pool's edge and hang on. They have to catch their breath. When my daughter is splashing around in her pool she has no time for me. I frustrate her. I'm uncool and annoying. My rules about her phone and her chores have no place at her pool party. She wants to be with her friends, float on her raft, have underwater tea parties. But when she gets tired of splashing around, when she's done holding her breath and doing back flips she'll need some support. She'll need to hold onto the wall and take some deep breaths. We parents are the pool's edge. We represent the clear support and comfort that comes during childhood. Our poor teenagers are in the middle, neither kids not adults, so they toggle back and forth between the two worlds, never sure of where to settle.

For my daughter, she tends to hang onto the wall at bedtime, especially on the weekends after a long week of school, socializing and maintaining the expectations that come with being a seventh grader.  I'll lie in bed with her and she'll say, "Mom, let's not read tonight. Let's just chitty chat." She'll lie on her side with her arm over my belly and snuggle in close. We'll chat her about day, her week, or some random observation she's made about the world. It's like old times and it feels good for us both to have a break from the tumult of teenagehood.

We all grow out of adolescence but we'll always need a wall, a place to hold onto, a moment to catch our breath. None of us can be eternally splashing. In life the pool's edge might be represented by a person we love and trust, or a place that's safe and warm and familiar, or an activity that feels grounding. At this stage in my life I am the pool's edge for my daughter. It takes a lot of patience and strength. I need to replenish my energy coffers often. It's a work in progress. Sometimes the wall comes from a good cry on Nancy's shoulder. Sometimes it's from a run with Kate. Often it's my yoga practice.  Life is a great big swimming pool and we're all just figuring out what tricks will keep us afloat.
at March 20, 2018 No comments: Links to this post 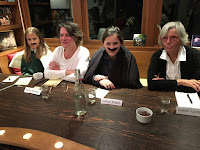 Over the weekend we had a family debate on Instagram. My friend Kate had the idea for the kids to argue our perspective and for the grown ups to argue the kids' perspective. Lucia's and her friend Oona argued against Instagram and Oona's parents Kate and Rupert and I argued for Instagram. Nancy, my partner and a lawyer organized the structure and acted as Chief Justice. My mother, Oona's little sister Bea and her friend Maya acted as the other justices on the bench. 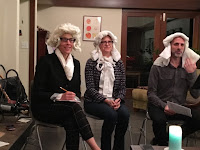 It was a great opportunity for all of us to learn the other side of the story and build some empathy and understanding about how it feels to be a kid or a parent in the world of social media. 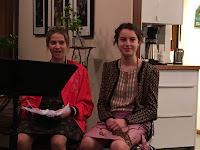 As the plaintiffs, Kate, Rupert and I (dressed like British Barristers) opened the proceedings with why Instagram should be granted. Then Oona and Lucia (dressed up like me and Kate) argued against it. The debate, scheduled to last about twenty minutes, lasted an hour-and-a-half.  Lucia and Oona argued well, ultimately winning the debate. Their arguments against Instagram and social media in general were compelling. The girls' main points against social media (Instagram specifically) were:


One of the most convincing arguments presented by Oona and Lucia was the idea that Instagram allows people to be indirect and this indirectness can really hurt people's feelings; it can contribute to anxiety, isolation and depression. Texting, calling on the phone or saying something to someone directly, they contended, are all better ways to communicate than a public forum where misinterpretation and group think are rampant.
Ultimately the girls won the trial. There arguments against Instagram convinced the judges that the app comes with significant risks and pitfalls. But the judges also decided that Oona and Lucia should both get Instagram accounts with certain parameters.

My personal experience having a professional Instagram profile has been complicated. When I look at other yoga teacher posts I invariably feel like I'm not doing enough, like I'm not creative or captivating or cool. But my mental health isn't compromised. I don't feel like anyone says anything unkind or cruel or excluding like what happens with middle school Instagram.

I share all of this in the midst of another social media experience I am having with a public forum that rates businesses. Recently I got a complaint about something at the studio. I immediately wrote the complainant back and committed to looking into her issue. I then granted this person a full refund, comped her a class and apologized for the inconvenience.  I invited her to call me directly and talk about her experience. A few days later one of our teachers noticed a review on the business rating page and let me know.

I was surprised by the review as I'd reached out to the reviewer just days before offering a remedy to the problem. I wondered why she felt the need to write publicly instead of contact me directly, especially after we'd exchanged several emails and I offered her a refund and free class in addition.  Why did she go public instead of calling me, connecting with me?

It got me thinking about Oona and Lucia's presentation of the pitfalls of Instagram. It's easy to be upset, to judge, to exclude when there's no direct contact, but is it satisfying? Does it make the individual who posts happier? I don't post on business review sites but I do regularly send emails to businesses where I have a good experience or a bad one. I'm old school. I believe that people generally mean well, even if I have a bad experience in their establishment. Mistakes happen. People have bad days. But most people are good and deserve a chance to be better. I want them to know directly, so I tell them.

I get it. Social media is the way of the modern world. We connect through it. We learn through it. But we are still human with hearts and minds and feelings and thoughts. As a parent I struggle to help my child navigate through this morass or messaging, posting, rating. I understand from my Instagram trial prep why people use social media, even why they love it.

As my daughter moves into this brave new world, I will encourage her to remember kindness, to practice forgiveness, to be open-hearted and assume best intentions. I know she'll be hurt, rejected, anxious and sad at different times because of what happens on Instagram. She'll have to find a way to shake that stuff off, to let it go. Like all of us, Lucia will also have conflict and feel hard feelings with actual humans face to face. But in those cases, she'll also be able to look the other person in the eyes, to listen, to offer or receive (or both) an apology, to get some kind closure.

As as I fumble my own way through the jungles of social media, I can see that I too will experience hurt, rejection, anxiety and sadness from social media.  I'm bummed about the interaction I had with the student who chose to use a public forum to talk about her experience at The SweatBox instead of reconciling with me directly which would have given us both a chance to feel closure, maybe even contentment. But that didn't happen so just like Lucia will have to do with negative experiences on Instagram, I'm letting this experience go. I'm shaking it off and moving on.
at March 07, 2018 No comments: Links to this post