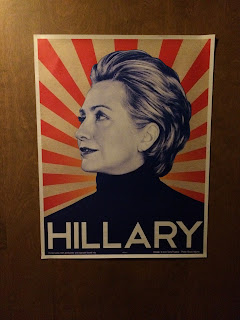 Last night my daughter Lucia and I wrote thank you letters to Hillary Clinton.  When Clinton lost the presidential race, writing to her was my first instinct. I needed to tell her what her running for president meant to me. I also needed to find a way for my 12-year-old daughter to process her grief about the loss. I hesitated to write this blog because over the course of the elections, I've experienced many moments in my liberal, third-party, west-coast, community being shamed as "right wing" or "ignorant" or "small-minded" for favoring Hillary Clinton. But, now in the wake of her loss of the election, I am more compelled than ever to be honest and open.

At a writing retreat I attended last month, one of the exercises we did was "writing the beautiful." We had to choose something in our life that was bad, even heinous, and write only the beautiful things about it. I didn't think I could do it, but I did. I got up at dawn on the second day of the retreat and set up my laptop overlooking the Pacific Ocean. I steadily wrote two short essays about things I didn't want to think about and I found the beautiful. I found memories, feelings, details that I hadn't let myself see because I was only looking at the event from one lens.

When Hillary Clinton ran for president, a new level of hope and excitement slowly unfurled for me. I was raised by feminist parents. My father, even back then, was the Board President of Planned Parenthood. He taught my sisters and me to play football and encouraged us to start a team at our school. My mother worked tirelessly for accessible clinic services for young women and helped us write letters of concern and complaint to Ronald Reagan in the 1980s.

Even with these feminist roots, I never knew, could never imagine that a woman could be president. Sure, I fantasized, I hoped, but I didn't believe it. A woman would make so much difference. She truly would change the world. Hillary Clinton looked like she was getting close. I let myself believe. The unimaginable became thinkable.

And then she lost. The electoral college declared Voldemort our leader, and my heart broke a little bit. As my partner Nancy and I watched Lucia sob over the results, swimming in teenage tears of disillusionment and disappointment, my heart broke a little bit more. The next morning when the dust had settled a little bit, I told my family that I was going to write to Hillary and tell her what her running for president had meant to me. I invited Lucia to do the same. It's taken a week to get the letters done. They were difficult to write at first because the blow of the loss was too close. But it helped, writing the beautiful, expressing gratitude to Hillary Clinton, a woman who let all of us, especially the 12-year-old girls in the world, believe that the unimaginable is possible.