I remember when I transferred from Chicago Public Schools to a private prep school in seventh grade. My parents, at their wits end from the constant striking of Chicago Public Schools in the late 1970s, finally abandoned ship. At my new school, during Language Arts one afternoon, the teacher, a stark, tight-mouthed woman with a faux British accent, asked us to write down one word that we didn't know from the book we were reading (I think it was Catcher in the Rye.) The word I chose was "wholly." After class the teacher, having never spent time with kids who'd been educated in a shitty school, pulled me aside and asked, "Laura, do you really not know what 'wholly' means?" She then explained that it was the adverb form of whole. I got it. It made sense. I'd simply never heard that word before. 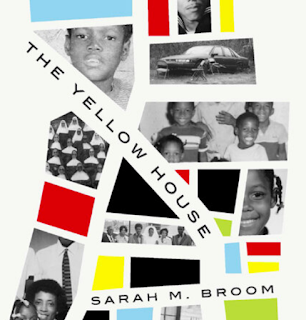 At one point during the book, Broom compares being in her chaotic school in New Orleans East to "an unpredictable, malfunctioning parts factory. You can never tell when a piece will fly off, hitting you in the face, blinding you for life." Shortly after, Broom transfers to a private school outside of her neighborhood where she is, in many ways an outsider, but also connects with a teacher who inspires and nurtures Broom's own love of words. Broom writes, "Writing, I found, was my interiority, and so was God." Later in the chapter Broom describes how speaking in tongues is interiority writ large, "You had to do it without shame, with no self-consciousness whatsoever. The only control was in letting go."

'Interiority' is a word that I've never heard spoken or seen written, but it was a word I immediately connected with. 'Interiority,' I thought, as I read it in the context of Broom's writing, must be a magical place, a deeply personal and important retreat, a place where one can be wholly oneself. So I looked it up. Interiority: interior life or character; inner life or substance; psychological existence.

Sometimes there is a point to my blog, and other times I'm just meandering. Today I am inspired by Sarah Broom, by her writing, and by the joy of learning a new word, a wonderful word at the ripe old age of fifty-one. The very concept of interiority gives me so much to think about-- what is my own interiority? What was it when I was a child? How do I help my own daughter find her's? Sarah Broom-- your book is feeding my soul right now and I am very grateful that you've shared your beautiful story.